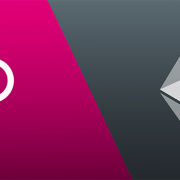 Polkadot is one of the most highly-anticipated next-generation, developer-focused blockchains. This comparison with Ethereum, the most widely adopted developer-oriented chain, is meant to help newcomers to the networks understand the differences between the two, and may help developers choose which one to build on.

At a high level, the two projects are only partially overlapping. Ethereum is a platform for deploying smart contracts, or pieces of logic that control the movement of native assets or state on the single Ethereum chain. In contrast, Polkadot aims to provide a framework for building your own blockchain and an ability to connect different blockchains with each other. Despite these differences, both platforms are designed for developers to build decentralized applications.

In terms of similarities, both Ethereum and Polkadot aim to provide a space where developers can create decentralized applications. Both platforms include smart contract functionality, based on Solidity for Ethereum and Ink! for Polkadot. If we look forward to Ethereum 2.0, both platforms are pursuing a scaling strategy based on parallelized execution. Each thread of execution is called a shard in Ethereum 2.0, and a parachain or parathread in Polkadot. Both Ethereum 2.0 and Polkadot will use Wasm as an underlying technology to power on-chain logic and state transitions.

There are, however, important differences between Ethereum and Polkadot.

One of the biggest differences is design goals. Ethereum aims to be a platform for distributed finance and smart contract execution, whereas Polkadot has a vision of helping people build entire blockchains and integrating these blockchains with each other.

I have attempted to summarize what I consider some key points of difference below:

LEARN MORE ABOUT STAKING ON POLKADOT WITH PURESTAKE

Ethereum’s key strength is its large and established ecosystem of developers, users, and businesses including its rich set of developer tools, tutorials, etc. It already enjoys significant network effects from this ecosystem, making it the de-facto smart contract platform to develop on. Ethereum standards, in many cases, become industry standards such as ERC-20.

The value of the Ethereum network is similarly significant, providing a high degree of economic security based on the value of the underlying Ether token. The DeFi space, which is one of the areas in the crypto space with the most developer traction, is largely built on Ethereum and leverages the composability between different Ethereum smart contracts that can call each other in the single Ethereum virtual machine that powers Ethereum 1.0.

The key challenge facing Ethereum is scalability. The success of the CryptoKitties application demonstrated some of the scalability limits that affect Ethereum 1.0. One popular application was able to significantly degrade the performance and throughput of transactions on the network.

Another challenge is the gas cost required to run smart contracts on the platform. Gas fees are required for the security of the system overall, and to protect the system from being stalled by runaway programs. But as the value of Ether has risen, gas fees for running smart contracts has also risen and has made certain use cases prohibitively expensive. These costs tie back to scalability, because if there were more capacity, the fees for each transaction could be lowered.

Ethereum 2.0 aims to solve all of these scalability issues, but it is multi-year roadmap with the execution risk that comes with a multiyear re-platforming initiative. Most of the Ethereum core dev energy is going into Ethereum 2.0, which leaves not much in the way of upgrades and improvements in the existing Ethereum 1.0 chain.

Polkadot: Built on a Flexible Framework, But It’s New and Unproven

Polkadot’s greatest strength is Substrate. Substrate is a development framework for creating Polkadot-compatible blockchains, offering different levels of abstraction depending on developer needs. Polkadot is itself built using Substrate. It dramatically reduces the time, energy, and money required to create a new blockchain.

Substrate provides a much larger canvas for developers to experiment on, as compared to smart contract platforms like Ethereum. It allows for full control of the underlying storage, consensus, economics, and state transition rules of the blockchain, things which you generally cannot modify on a standard smart contract platform.

The design of Polkadot — which allows for shared security within its network — is another strength. Shared security has 2 key benefits.

First, it reduces the burden on parachain builders by providing security-as-a-service from the relay chain. This is different than the approach taken by other networks such as Cosmos, where each zone is fully responsible for its own security. This shared security simplification lowers friction for builders and simplifies the process of launching a new parachain.

Second, shared security provides a framework for parachains to talk to each other, which ultimately allow will parachains to specialize. It reminds me of the old Unix philosophy, where you create tools that do one job and do it well. Then you can achieve higher order goals by combining these purpose-built tools together. I can see something similar happening in the Polkadot ecosystem. This is the power of the Polkadot design that should create strong network effects on the network.

To mirror the old real estate saying, the top three challenges for Polkadot are in my mind are: adoption, adoption, and adoption. Ethereum has a dominant position and the largest developer community of any developer-oriented platform. Further, there are a lot of new platforms coming to market that are looking to compete with Ethereum and gain developer mindshare.

At present, there are only so many developers to go around. We are in a situation where there are more developer platforms than there are developers to support and build on them. The real challenge for Polkadot is getting enough traction and building enough of an ecosystem and developer community for the network effects of their architecture to start to kick in.

In summary, if you are a developer researching these two platforms for your decentralized application, it is a little bit of an apples-and-oranges comparison.

Building on Ethereum is a safe choice and makes sense if your application can be expressed easily as a smart contract, if your use case is affordable in terms of gas fees, if you don’t need a large amount of transaction throughput or control over the underlying economics of your system, or if you need interoperability with other Ethereum ecosystem projects at launch. Development on Ethereum is generally going to be simpler than Polkadot.

If on the other hand, your application is best served by a dedicated blockchain, if it needs higher transaction throughput performance, if you want full control of the environment, state transition function, storage, and economics that your application runs under, and if you are okay with higher implementation complexity, or have use cases that require integration across blockchains, Polkadot will satisfy these requirements.